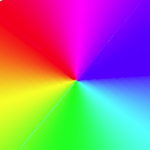 I got an email today from someone who was a bit confused because she’d been to a number of color sites (including Dyed4you’s color chart) and found differences in meanings. It’s understandable how that could seem confusing!  And since searches for “biblical colors meaning” and “prophetic color meanings” are some of the top searches that bring people to Dyed4you, I thought it was a good topic to address 🙂

As I prayed to think of a way to explain this, the parallel I got is that God uses colors like we use words – in the sense that He is saying something.  I may use the word “cool” to mean:

And yet it’s all the same word.  To describe temperature I might also say “chilly”, I might just say “ok” if I’m ok with something, and I might describe a person I like as “fun”. So is “cool” wrong and “fun” right?  No it depends on context and what’s being said.

I say all that to say that in the end, God uses color as a means of communicating – but the primary purpose of His communication is about relationship, not about transferring information.

For me personally, when God shows me a color, I may start with the list I keep (because it’s ways that He’s used them with me before) and sometimes He highlights one of the meanings to me and so I know that’s what He’s saying.  But sometimes nothing is highlighted. Then I have to press in – “what are you saying Lord? Is it a new meaning?”  Sometimes it is a new meaning, or sometimes He might tell me to visit someone else’s color chart and He highlights one there. Or He might have an intercessor randomly contact me and tell me!  He’s a big God and very creative 🙂

What I find is that many people get frustrated with the process of finding out and so they give up or think God doesn’t want to tell them.  Let me put that lie to rest – he ALWAYS wants to tell you, He just may want you to dig a little. 🙂

If you want to know why He might do that, I explain it in this post: Gelah Raz (Revealer of Mysteries)

Hopefully, you found this helpful!  Bless you 🙂

View the color chart on Dyed4you