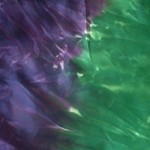 In late October, I created a prayer cloth called Goodness – it was purple and green and had a “ripe-ness” too it – representing the goodness of the land. I posted it on the website as it waited for it’s home.

On November 1st, a friend from church purchased it for a mutual friend of ours. I anointed it and prayed over it and sent it off to our friend. Unbeknownst to us, our friend had been praying over a missions opportunity that she’d been presented with by a woman she’d met while at a missions training school. She went on a three-day prayer fast to seek God’s face over where He wanted her to be; she wanted to be very sure she was moving in step with His will – particularly since the opportunity was in a rather dangerous region.

As she prayed, she was reminded of a piece of cloth she and the woman had – in a prophetic act – cut in two. The cloth was green and purple with a design in the middle that looked like an arrow once it was cut in half. As she looked at her half, she wondered if God might actually use a piece of cloth to communicate to her His desires. A little later, she went to the mailbox and found Goodness – a green and purple cloth that was whole!