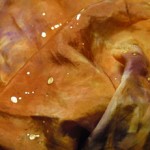 When I made this scarf, I made it for someone else. I knew the Lord had told me to get it done in time to bring to church one Wednesday evening and so I hurriedly finished it up, whisking out the letter and getting it all set to gift to my friend named Rachel. Only it turned out she wasn’t at church. I thought I must have missed God.

After church another friend asked if he could introduce me to a young lady that he thought I could be an encouragement to. He brought her over to where I was talking with an intercessor friend of mine who immediately sensed this young woman needed prayer and she indicated that she did.

Without knowing anything, we began praying for her. As my friend prayed, I sensed the Lord saying that this was who the scarf I thought was for my friend Rachel was actually supposed to go to. I argued with the Lord silently for a moment before determining that I was His to make a fool of if He wanted – so I figured I’d best be obedient!

When all the prayers had been said, I told the young woman that I’d brought a scarf I’d made for my friend Rachel, but that God was telling me to give it to her. As I read the letter below – she began to cry softly.

This scarf is called Resting in His Glory. It is amber (God’s glory), black (God’s presence) and gold (purification). The day I dyed this, the Lord had me doing a number of amber/black scarves. First I created a scarf called “Hiding Place”, and then he had me create one called “Warring with Blessing” which was made by seeping up the remains of Hiding Place and adding gold to it. He’s had me use dye remains before – it’s symbolic of God taking what seems broken or ruined and creating something beautiful. But what God had me do next I wasn’t prepared for.

He had me use your scarf to seep up the remains of the remains. In other words, double remains – so that which seemed doubly wounded, doubly broken, doubly used up – to that He had me simply add amber (His glory).

Essentially what it means is that through all that has brought you pain – God is creating such beauty in you through His purification process as you rest in Him – in His glory, in His presence. Pressing in will continue to bring more and more breakthrough – more refining. And in the end, much like this scarf, you are beautiful – multi-faceted – deep – and more like Him. 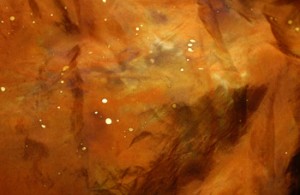 Later, I became good friends with the young lady and I found out that the letter with Rachel’s name on it hangs on her fridge. She just figured it might be God’s way of getting some prayers for Rachel – so she’d pray for her when she looked at the letter… when Rachel heard that she was so blessed!

As the young lady and I became better friends I began to understand more fully what God had done through this simple scarf. I asked her to share the story from her view point as well…

As Meghan previously said, I had met her and her friend for the first time when they prayed with me. I recall her going to get the scarf and proceeding to tell me about how the Lord gives her meanings for each scarf. I thought it was really neat, and then she pulled out the scarf she was giving to me. As she read the letter that described the meaning, I just fell apart.

Prior to that evening, the Lord was really working in some of the deep and painful places of my heart. Honestly, not two hours prior to having the scarf in my hand, I was wondering if God had just forgotten about me and if He even heard my voice anymore. I just sat there holding on to that scarf, holding on to the faithfulness of God in a tangible form.

The heart of God, hidden in the scarf, still amazes me. The letter that came with my scarf spoke directly to my life. Despite the brokenness of my heart, God can still treasure me.

The scarf is like a promise to me – a promise of God’s ability to use me despite my brokenness, of His deep faithfulness to me in every season of life, and of His knowledge of the smallest details of my life. I’ve never felt such a sweet and loving fingerprint of God on my life. I still find myself holding it every now and then, just to feel that closeness with God Himself.

9 thoughts on “Resting in His Glory”