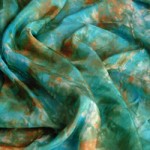 One day the Lord put it on my heart to send a scarf to a woman I’d never met or even spoken to on the phone. We were connected through a mutual friend. It took me a couple weeks before I had a chance to dye the scarf and a few more days before I wrote the letter and sent it off. The letter the Lord gave me was this:

The Lord told me you needed a scarf. I was seeking His face on what that should be. I was making seven large veils for a dancer – the Lord had instructed her to get seven done on seven verses that occur during the crucifixion. As I made the 5th veil called “I thirst” (from John 19:28), the Lord told me to make another one for you. So I did.

So the name of your scarf is “I thirst”. The brown represents humility and a contrite heart, the turquoise represent river of life, and the white represents victory. What God began to show me as I made this scarf is that as the brown (man in our humility with a contrite heart) is flooded by turquoise (the river of life – God’s living flow), it makes green which represents life and healing, that is the essence of our victory. Isn’t that awesome? So as we are humble and pressing into Him, He brings life and victory. Wow. What a promise.

So thirst!! Thirst for more of Him and drink to your hearts content… His healing flow will wash and is washing over you.

Your scarf was prayed over and anointed with the Scent of Heaven’s River of Life, which is used to usher life in wherever it’s needed. The River of Life speaks of healing and purification. It can bring life to the land, people, relationships, situations, places… anything. It contains salt for purging, hyssop for purification, pomegranate for health and to represent the Blood, cyprus to cleanse anger, and cedar to cleanse bitterness.

I pray this blesses you…

A few weeks later, I received this lovely thank you note:

I hope you all are doing well, and I pray constantly that God is blessing you – as you are such a blessing to many. I would like to thank you again for your precious and perfect gift.

Before I received it, I was on the verge of giving up on everything, throwing my hands up and walking away from it all – my marriage especially for years it’s been in trouble, and we’ve even separated a few times. We both know that this is it… All or nothing.

I’ve been praying so hard (and still am) for God to rekindle the flame that burned inside of him for a short time when he came to Christ. I even gave my marriage back to God last year (including sowing my engagement ring) because I had done all I knew to do. It just went downhill from there.

The last thing I asked God (the week I got your scarf) was if I should stay and continue the fight, or walk away. I asked him to give me a clear sign straight from Him if I should stay. I also asked God to show me his love… I wanted to feel his love.

Then a few days later I received your scarf and turned into a blubbery mess 🙂 Your letter was dated the exact day I was praying for all of that. Then, on a day I needed God the most, he showed up in my mailbox!

You anointed my scarf with River of Life, which speaks of healing and purification. It also stated it contained cyprus to cleanse anger and cedar to cleanse bitterness. Those are 2 of the biggest issues in our marriage.

The name of my scarf is “I thirst”, with colors of brown (humility and a contrite heart), turquoise (river of life) and white (victory). Now that’s what I call a clear sign!

During the day I keep it in the office or on me and at night it lays on my pillowcase. Many times at night I just put on worship music and either lay on my pillow or drape it over me and worship Him.

Thank you so much for allowing God to use you. You are such a blessing!

View the I Thirst scarf on Dyed4you