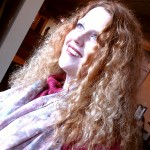 So a few weeks back I was celebrating a friend’s birthday with several other friends.  I knew I was going to be dyeing when I got home and as things began to draw to a close God told me to invite her to join me, which she did (if you understood where I lived in relation to her you’d understand that it was a big deal she said yes! LOL)

We got to my house and I consulted my list of orders and I started pulling out the scarves and prepping to dye.  As I did so, I sensed the Lord telling me to include a scarf that was for her, but not to tell her it was for her.

Several of the orders were ones God had already spoken to me on what they were to look like (including His Child), but there were 3 that I didn’t know yet what He wanted (on one I had 1 piece… warrior/warfare, but given the person’s situation that felt more like a “duh” than anything prophetic!).  I sensed Him telling me to let her make those 3, which included the scarf for herself that she didn’t know about.

She happily watched me do several and then I lay out the first one for her to do (the “warrior/warfare” one, which by the way – I didn’t tell her) and she created a beautiful turquoise, royal blue and gray “man scarf”. She began telling me about it and I took notes – it was right on and she knew nothing but that it was for a man… the name the Lord gave her for it was Mighty Warrior 🙂 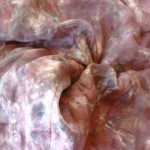 Then she created the second one, which God gave her the word on later and it too was right on. And finally, she created the third one — her secret scarf.  She told me all about the scarf and I frantically took notes and wrote the scarf letter based only on what she was getting.

When we were done she looked down at the scarf admiringly and I said “Happy birthday” and she said “Thanks” still not understanding that it was my gift to her.  Then I said, “no, I mean Happy Birthday as in — this is for you!”  The look of complete surprise on her face confirmed that she had not suspected a thing!

She asked me to read the letter she’d just dictated back to her – now hearing it with new ears.  It was dead on. It completely aligned with what God’s spoken to her and previous words she’d received. And it was SUCH a timely reminder… as she, like many of us, is in a desert season that feels endless.

I love how God’s gift to her was not just a tangible reminder of His call on her life, but a tangible reminder that she hears from Him… which is SO precious, as anyone who has been through a desert season knows only too well!  He is such a good God… and He knows how to give good gifts 🙂

12 thoughts on “Prophesying… to herself?”