This scarf had such a profound impact that it took the recipient several days to even process what God was sharing through it. I’ve broken it out piece by piece and what an amazing story it is!

Here was the first note I got from her:

I received a semicircle scarf from Meghan a couple of days ago. The moment it was handed to me I felt God’s anointing come over me. I can hardly put into words what has happened to me but I do know that if the Lord has told you to purchase one of Meghan’s scarves DO IT NOW. NOW is the time, now is the time that God is calling His true worshipers. He is preparing us for continual worship. Meghan’s scarves are gifts to us from God to experience His true worship. Don’t delay. Don’t delay. I’m praying for many, many, many more scarves!!! 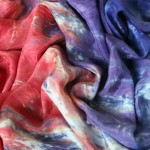 A couple days later I received:

I felt the anointing so strongly through my scarf that I slept with it on my chest the first 2 nights. God’s sweet comfort, peace and joy enveloped me all night long…..

I have used it 5 times now for worship at  a worship conference and at church. Each time the presence of the Lord comes over me in almost waves of an anointing oil. So rich, so sweet and so loving. I feel completely saturated by His love. I enter into worship so easily. I know this is only a scarf but it is a beautiful and anointed scarf!!!

I went up to the front yesterday at church and praised and worshiped with the scarf (which I have never done). The worship was so heavy that you could feel it. It lasted a while and the Pastor said that he felt that things were being broken off of people and major breakthroughs were happening for the church and people. 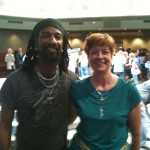 Finally, several days later I got to hear the full story of what happened at the conference she was at over the weekend (where she was with our friend Caleb, who you see in the picture with her).  I added headers to the sections to chunk up the text a bit 🙂

About the Wing and How it Confirmed an Earlier Vision

While at a conference this past weekend I experienced a presence of the Lord that I have never experienced before. Meghan’s scarf has been a confirmation in what God has revealed to me. When I opened my scarf Meghan had enclosed an explanation of the colors. Ox blood red represents living sacrifice, royal blue represents priesthood, purple represents intercession, white represents holiness. The Lord specifically showed her that the red in the scarf should be poured from the top – like blood pouring down and covering.

Years ago I saw an image of me standing on the ground but when I looked up all I could see was the blood of Jesus. God said to me “now I want you to see this as I do”. He showed me that He looks from above and when He is looking down at me all He sees is the Blood of Jesus!!! This scarf confirmed an image that I had about 20 years ago!!!

Deliverance and a Vision

Later on that night I went through deliverance with the ladies in my hotel room. Bondage was broken off and many, many other things. But the word kept coming out that I was a worshiper and that I was to praise him and proceed with making flags for worship.

While at this worship conference God started showing me things in praise and worship that I had never seen before. Clouds of praise and worship going up as I waved the scarf. Images of the throne room, almost a misty view. Not real clear but I knew it was sacred. Gold lots of gold and in particular gold pillars, pillars that were twisted like a rope is. It was glorious. When the conference was over I knew that I had been set free and had entered into a entirely different dimension of worship with God.

I repaired and reworked some Lion of Judah flags for a brother in the Lord a couple of days ago. I have sewn since I was in junior high school but the weird thing was that I became completely engulfed in fear about working on his flags. I called my friend for prayer. I also asked Meghan if she would pray for me. Five hours later and many attacks I completed them. When I took them to my brother he was thrilled with them and how they felt. I knew without any doubt that God Himself had helped me work on the flags!!! 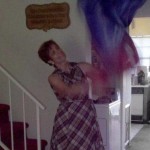 Visions and Words during Inner Healing Confirmed by Scarf Word

I went for more inner healing yesterday at a friends house. This friend wasn’t at the worship conference nor were any of the other ladies in the room. We prayed and the Lord brought my mind and spirit back to when I was 3 years old… I saw an image of me dancing in the living room with a pink ruffled dress. Jesus came into the room and I was no long the me that had gotten lost along the way. I was dancing with Jesus and playing with my skirt and Jesus was saying, “Be Free”! Then I saw a picture of Jesus that really was in our living room growing up. Jesus came down from the picture and placed His hands upon my head while I was kneeling in front of Him.

Their was oil coming from His hands and it slowly dripped from the top of my head down my entire body to my feet. It smelled like honeysuckle from my grandmother’s front yard! I asked Jesus what it meant and He said it was the oil of gladness. He than gave me a shield, a gold handled sword and golden dancing slippers (mind you I am not a dancer). I had on a party hat that had flowers, and was feminine. It was flowing and had character and flair. This really is my personality but I’ve been battling with the real me for as long as I can remember. Than I had an image of when I was sick in an oxygen tent.

When I asked Jesus where he was the image changed in my mind to me sitting in Jesus’ lap inside of the oxygen tent. He was there all along and I didn’t know it! I blamed myself for not knowing that Jesus was there. My friend asked me, “what is Jesus doing now”? The image changed again and this time Jesus was handing me a flag. A flag that “catches the air”, and “has a nice sound”. The flag was red, white and blue but as I looked at it, it changed to gold and purple. Jesus set me on the sidewalk in front of the house I grew up in and said “GO”! I’m now about 6 years old, marching up and down the street in front of our house. Actually I was marching from a music store that was on the corner, back in front of our house and then on down the block to a beautiful 2 story house that I had always thought was magical growing up. The Lord was saying “take the music and the flag into the house” but this meant the house of God!!! …

I am a breast cancer survivor and have felt toxic stigmas from the many surgeries I have had. I have also felt that my arms are weak from the surgeries as well. God spoke to me and said ” that he was giving me strong arms in the physical and spiritual realm”. So He had me give Him all of the attitudes I had and as I did it turned into Fire in His hands. This was all further confirmation on what God has called me to do for Him. These ladies had NO idea whatsoever what is going on in my life. In fact one of the ladies has seen Meghan’s scarf and she doesn’t even know where it came from.

View the semicircle on Dyed4you

11 thoughts on “Freedom, Confirmation & His Presence”