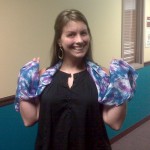 Though I know the first two scarf giveaways were blessings, this is the first official scarf story from a Dyed4you Blog giveaway scarf, which I must confess is kind of exciting for me 🙂  It went to Amanda E who posted the 222 comment on the blog.

I also must confess that I cried when I saw Amanda had won it because I knew at least in part what God was saying to her… God’s heart is so beautiful! Below she shares the story in her own words 🙂

I don’t even know where to begin on this one. First of all, thank you for blessing me with this scarf!! I like to comment because the testimonies encourage me, move me, and are a constant reminder of His faithfulness, love, and that He listens to our hearts. The testimony I commented on I wasn’t even going to at the time. I was just going to wait until morning. But I was very overcome with His presence and was crying. Just knew I needed to write it then. Not even 2 minutes later I get the email I was the “winner”…..started sniffling again. (By the way, you and another dyed4you fan had commented that the #222 was significant to the both of you and I’m hoping after I share this you guys will tell me why, LOL).

Then Meghan, you just had to tell me the name, LOL. I bawled!!! (I think we both were, LOL). Although I don’t have enough time to delve into the entire story, the basic thing is that this season and current spiritual fight I’m in is having me learn to COMPLETELY surrender and just rest in Him and His promises to me. This is not my battle, it’s His. He alone is the only One who can win this for me. I just need to stand firm on His promises. It’s a huge learning time for me and building on my faith also…lots of trial and error.

He’s kept reminding me that this is a season of grace and that it’s new and abundant every day. So today, the scarf came in the mail…”Peace in His Promises” anointed with “Faith”. I was crying when I was holding the package. I could SMELL the anointing oil even before I opened it. It was so strong and I was just washed in waves of peace. The colors, LOL… oh the meaning of the colors. God, You are so amazing.

The colors and their meanings…. how on earth does He do it!?  The verse the scarf is based on, Romans 4:21, is one I’ve actually just recently started confessing… “(I am) fully satisfied and assured that God is able and mighty to keep His Word and to do that which He promised.”  There’s a song called “He’s Able” I sing all the time to remind myself of this. I stood at my kitchen sink and just cried when I read that.

Then the verses the anointing oil is based on. Ephesians 6:16 “Above all taking the shield of faith…”. Wow… I wish I had the time to explain what that means to me specifically, but He’s been teaching me about who He is as my defender, protector, strong tower, hiding place, my SHIELD. I just need to have faith! And man has he been teaching me about building up my faith for what is to come (both personally and obviously for these last days). Then Hebrews 11:6….”He is a rewarder of them that diligently seek Him”. 2 things He’s been stressing to me: STOP trying to find a reward with someone else. Just keep seeking hard after ME and I’LL reward you and lift you up in due time. Your season is coming!

I just stood at my kitchen sink with the scarf around my neck BAWLING my eyes out. The last thing about the oil is it talks about cedar being included in the oil. It describes what a cedar is, it’s roots, etc. LOL…. what an incredible confirmation of what had just been prophesied over me this past Sunday:

“Rejoice over the seed!”. The Lord has impregnated you with a seed and there is still a lot of growing that needs to be done with the seed that is in you. You are as far as knowing the gender (the office) of the seed. The seed can be uncomfortable during growth and there will be some labor pains. But that is a part of the preparation! Yes, the seed will be for a tree; a BIG tree with MANY branches. It will get to the point where the tree will be SO big and tall but there will be much HUMILITY. There will be MANY branches symbolizing the reach of what the Lord will be having you do. The tree being tall is because it will cause you to be an overseer. People you won’t see but only by the direction of the Father. There will be such a strong connection! Rejoice! You’re pregnant and there may be some labor pains, but will bring growth and peace when it’s born. Then you have to train (water) the seed (gift) even more to continue it’s growth because giving birth isn’t the end of your gifting. This is the beginning.” 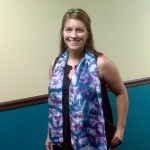 God has been speaking to me about my calling since December 2009, and even then He kept calling it “a seed of greatness…like an oak, like a cedar.” There’s so much I could expound on about this specifically, but I think you get the idea. Lastly, I had ordered anointing oil from Carol at Scent of Heaven and she included a petite of “Showers of Blessing“….significant because of a scarf that’s anointed in this oil that’s personal to me. I had to go sit in a chair by this point I was crying so much. The scripture included on this oil was Ezekiel 34:26 “And I will make them and the places round about my hill a blessing; and I will cause the SHOWER to come down in HIS SEASON; there shall be showers of blessing”. Carol’s beautiful gift to me SEALED all of what just happened and had been spoken to me. It was the PROMISE of what’s to come!!! I’m sure Carol knew she was blessing me, but probably not to this extent, LOL.

This means so, so much to me. Each scarf I’ve received has been so significant to what the Lord was speaking to me. This one, however, has caused a new stirring in my spirit and a sense of the “seriousness” of my calling. I can’t explain the stirring in my spirit. It’s boldness, fire, peace, brokenness, humility, and an urge to just worship Him like I’ve never done before. He’s reminding me to stay on course with Him and seek hard after Him, chasing down what He has for me. There’s just an overwhelming awareness of the time at hand, and why I need to continue to stay focused. It’s a reminder that I need to stay busy in Him and Him alone. Thank you SO MUCH Meghan (and Carol!!) for confirming God’s Word to me and blessing me the way you have!