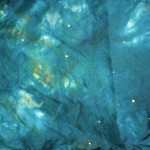 This is just a short scarf story about a scarf I made in May called Fertile. When I made the scarf I asked the purchaser (who was giving it as a gift) if she knew if the recipient was trying to get pregnant because it was what I sensed God showing me, but she didn’t know.

After she gave the gift to the woman she found out that they HAD been trying to get pregnant, but hadn’t been successful.  It was encouraging though for me to hear that what I’d been sensing was on target, so I believed God would be faithful 🙂

Yesterday, I got word that she is now 17 weeks along (due in March), which means she got pregnant within a week or two of receiving the scarf! What she told her friend who’d gotten it for her was “the scarf worked!”

Just to be clear, these scarves are not magic talismans or anything… but it is a joy and an honor for Dyed4you to get to agree with the plans the LORD has in someone’s life and see those plans come to fruition!