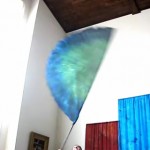 I realized yesterday that though I offer the wing/flag seam for the semicircles, I’ve never done a demo of what the semicircle looks like as a flag.  It’s not long like the 45×108, which makes it much harder to get tangled on itself 🙂  Because of it’s size it still gives a big feel.

This particular semicircle you’ve seen before as a wing and a voi. Fun to see all the options you can have out of one piece of silk – and this doesn’t include simply dancing with it with no poles/sticks/voi or wearing it (which I do!).