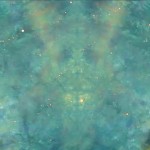 This silk was an interesting one because as it was being birthed a song came forth too! So I recorded it and uploaded a video of it with the camera facing the silk. When we looked at the video, a face was apparent in the silk – it was especially funny because several people who DON’T normally see things in the silk saw it because it was so clear. 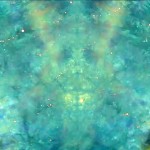 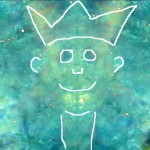 Later I got a testimony from the recipient:

Meghan, I felt it was time to respond to your generosity in blessing me with a scarf, card, song of the Lord, fragrance and scented scarf called Jehovah Rohi, I was so blessed.

I operate in the Office of the Prophet and as a Warrior with a ministry, Cultivate the Harvest. I have been under attack since being part of Kim Clements ministry as a dancer in Detroit. Flags are a big part of worship.

I came under attack and I could not dance anymore and became bedridden with physical pain. Having warfare every night pleading the blood having sleep disturbances. I was lead to go to you after I saw you blessed Kim Clement, God said to me, Now go ask.

I wear the scarf when I speak at churches around my neck tied in a knot. This gift from Dyed4you is a great blessing. Never take your ministry for granted.

One other thing that was interesting about this scarf was that normally, there’s no shimmer on it, but with this one God had me add gold shimmer. Here’s what He shared with her about those:

When I received the scarf the paint drippings of gold were interpreted to me as His tears.

12 thoughts on “Peace Against Warfare”