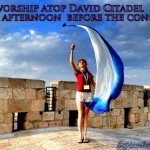 This is such a fun story about the Doohan Sisters in Israel. The girls are prophetic dancers and have such a heart to minister. This past summer, the Lord gave them a clear vision of some semicircle voi to take to Israel with them and brought them to Dyed4you to have them created.

Here’s a fun shot of them practicing before they went! 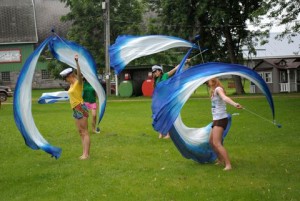 Here’s the story they shared when they returned:

Thank you again for the awesome voi.

Here is our report back to you on the voi that went to Jerusalem, as they were shown over television and internet to over 600 million viewers!!!! The girls really were natural beauties with the beautiful voi, the producers were pleasantly surprised. Sissey is shown in the photo lower left with voi 🙂

The event was sponsored by Israel Dept of Tourism and GOD TV Europe, and also Kim Clement Ministries. It was attended by Jerusalem Mayor – interviewed on broadcast – and others, viewed by Benjamin Netanyahu.

Here is photo of Bridgette, (and sisters Katie,Kelsey, Sissey) at rehearsals Hollywood Studio with voi: 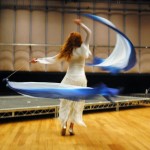 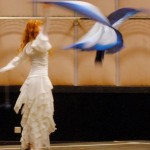 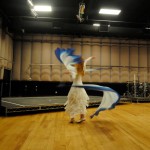 You can see this short clip show a bit of the voi – shown at end of television event. The 4 girls were stationed on several levels on walls-each on spotlight – the wind had really picked up so they did not attempt a lot of movements but the flowing wind in voi was awesome & a precious ending to an awesome event – it kinda has a long song but does give you idea of the ends of the event with voi shown as very last crescendo! yay! 🙂

The early evening before the even the girls worship on top the Davids Tower for several hours (((maybe not a good idea as they were a bit tired when it came to performance time)))  Voi opening the Heavens: 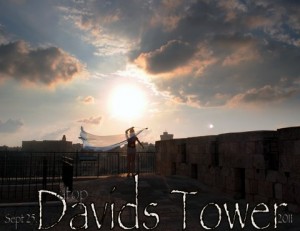 After the Jerusalem event the 4 girls danced Star Princess and participated in Jewish events on the ship throughout the Mediterranean 12 days, from Rosh Hashanah to Yom Kippur. Everyone on ship loved the voi: 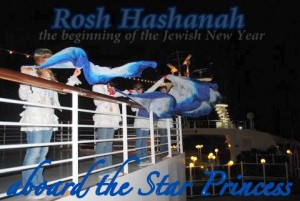 It was amazing and everyone especially loved the voi – people did not want to leave the event!!!! They kept watching the girls waving the beautiful voi !!!!! It was really an emotional moment of hope to Israel & an honor and privilege for the girls to be a part of it all.

Here’s another video, this time with them dancing together (not with the voi) – they’re so precious and their passion just radiates!

13 thoughts on “Doohan Sisters in Israel with Voi”