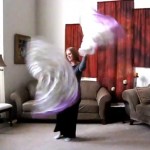 Apparently I’m in a quill mood today 😉  Here’s a fun video from Allissa’s visit of her with her quill flags called Shuwb (restore in Hebrew).  Enjoy!

The music is Ariel singing in the Destiny Church Prayer Room 🙂

19 December 2011 – Apparently I jumped the gun in posting this.  Allissa shared her story that goes with them with me last night and I wanted to share it with you because I thought you would be blessed!

God did a a good work with me in correcting something that I had done not according to His will and plan. I did not have the “go ahead” to buy these Quill flags and as a result I never felt connected to them. There was something amiss. I started asking Him about something related and He said that I had never asked if I could buy these. I then realized I had assumed it would be ok instead of waiting for a “yes”. This awareness came at me heavy. I acknowledged my sin and repented. It was hard. I had now begun to be more attached to them so I prayed I could keep them. I knew that I might not and I was willing to give them up if that is what He said to do.

After a couple agonizing days He began to speak to me about restoring Shuwb (which means restore). In His mercy and goodness He told me He would let me keep them. He restored Restore.

11 thoughts on “Allissa with her Shuwb Quills”