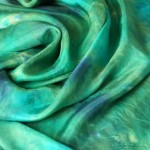 This is a fun story about how the Father connected Blair Healing Rooms with Dyed4you. I actually shared a later story earlier this year – I’m finding all sorts of story gems I haven’t posted yet!  Enjoy 🙂

When I found the Dyed4you website, there were so many beautiful patterns and encouraging words, I wanted to order many, not just one. I visited many times and finally decided to contact Meghan to see about creating some custom scarves for my prayer team and me rather than trying to pick a pattern myself. After giving Meghan a bit of information on the prayer team’s purpose, Meghan suggested a pattern, Healing Flow, for the prayer team.

The second scarf pattern I requested was one specifically for me. I made sure I didn’t tell about my personal color preferences of jewel tones and purple, a color which I linked to an encounter at the beginning of my prayer team journey. 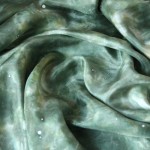 When I received my package I was thrilled – no jewel tones here – beautiful muted shades of green with touches of gold and white. The scarf letter conveying the name ‘Stand Firm’, scripture, and color meanings was an encouragement. One item that seemed to jump off the page was the description of the color white as the Light of Jesus. I had recently received and embraced teaching on the Light of Jesus and this seemed to be a confirmation of those teachings.

I received the scarves on a prayer team day and took my custom scarf to our meeting. After oohing and aahing and agreeing to receive the word to ‘Stand Firm’ for the prayer team, I received requests for where to obtain the scarves. Oops – problem. I didn’t want them ordering scarves yet – I hadn’t told them about my plan to give them scarves. I tried to ignore the requests but come Sunday someone reminded me that I had not yet given her the information. I told her husband my plan to give her a scarf so he would understand why I was stalling. He likely would have run interference if needed, but that probably wasn’t fair to him. At the next prayer team meeting I brought my samples of ‘Healing Flow’. The team members thought the scarf was pretty when they thought it was my scarf, but when I read the scarf letter, and told them they would each be receiving a scarf they were thrilled.

I continue to ‘Stand Firm’, sometimes with more grace than others, but knowing that I am planted where God wants me. And the team? They are waiting for their scarves. I placed an order today, so it won’t be long until they also have a tangible reminder of what God is doing in and through them.

7 thoughts on “Almost Ruining Her Own Plan”