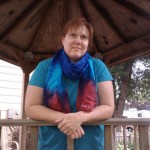 All scarf stories are fun for me, but it never ceases to amaze me how He works through the Dyed4you Blog Giveaways. This was one of the first giveaways where He told me to find the winner among the previous comments – which makes it extra fun because anytime someone leaves a comment it means they could win at some random future point too!

Here’s what she shares about her 22×72 silk called Coming Promises which had Hebrew added as well:

Thank you so much for the gift of the “Coming Promises” scarf. God’s timing always amazes me and is always on time. I was overjoyed when you announced that I had won this. There are so many things about this that touched my heart.

When I received this, I was going through such a dry season with the Lord and was questioning my purpose and my future. Nursing school had gotten harder and I was wondering if I really wanted to be a nurse. I had lost sight of my dreams and was asking the Lord what they were again. The letter that came with the scarf says “I am sensing that there are promises that you have been waiting on God for. They hang out in mid-air like questions marks…” This reminded me of my dream search. They definitely were like question marks hanging in mid-air. In that moment, God spoke to my heart and I realized that my dreams ARE His promises. They never left and they aren’t elusive. 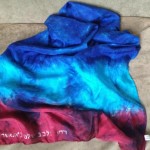 The very first color listed on the letter is Turquoise for the river of life. This is the color of my season. I have been choosing this color for everything for months without realizing it, starting last summer. Once I realized what I was doing, I started meditating on the river of life. So this was just further confirmation that this scarf was meant for me.

The final kiss from Papa God was the Hebrew lettering on the scarf. I was given a prophetic word many years ago that the Greek and Hebrew are like treasures to me, and she was right! I love the rich meanings that are hidden in the Hebrew words. I have not had time to dig into the scriptures at this deep level since nursing school started, but I have since I got the scarf! Being reminded of this secret passion in my heart, stirred it up again.

Thank you SO much for your ministry and generous heart!