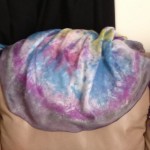 A pregnant woman came to me and wanted to order a scarf to have with her during the birth of her daughter.  Immediately, the Father brought to mind the Birthing {babies} silk. I second guessed Him at first because I’d always thought of it as being for people wanting to conceive and she was very much already with child! He reminded me ALL children are miracles from Him and so I obeyed.

She had originally said to me just to do a small silk, but what He showed me was the big 5mm semicircle.  I confess I hate it when He shows me things that cost others more money and that appear to benefit me – it feels self-serving even though that isn’t my heart, but I am always concerned it will appear that way. But I knew what I’d seen, so I sheepishly went to her and told her He’d showed me a different size silk – a much larger one.  She deferred to what He’d shown me and I discovered later was incredibly glad she had.

And when her daughter was born, she wrapped her up in the silk 🙂

She was so blessed by her Birthing silk, she told another pregnant woman in her congregation that she should get one too (and she already has, that will be a scarf story too… but you’ll have to wait a few months yet for the whole story!) 🙂

As I’ve said in other posts, the silks aren’t good luck charms, but the fact is that tangible reminders of His promises can be really helpful and encouraging!

As I typed this story up, I also sense Father showing me that her having the silk with her during labor is actually like a prophetic act that comes into agreement with the others who have the Birthing {babies} silk who are standing in faith for their little miracles.  Father, may it be so!  Amen!!!

14 thoughts on “Birthing with her Birthing Silk”