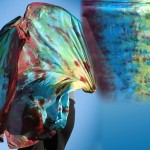 Some of you may remember me sharing a post called Releasing Control, where I talk about how Father has used the dyeing process to take me to deeper levels of releasing control to Him (if you didn’t read it, before it’s a good one).  Well, He’s taking me to a new level 🙂

Recently, He told me I’m not to keep track of who has gotten which style silk. Now I don’t mean if you forget the name I can’t look it up, what I mean is it isn’t tracked in a way that lets me easily check whether I have sent you one of a particular style before. In other words, it is possible you might get sent the same style twice.

I will admit. This stretches me – a lot actually – and I argued with Him about it at some length until He reminded me of the two instances it had already happened.

In the first instance, He was reiterating a word to someone as well as giving her an additional impartation because He was having me send some of my personal flags. Very much a “God thing”

In the second instance (which I’m hoping to eventually have the full scarf story on), someone rebuffed a Dyed4you silk gift from a friend because it was not her color preference (red hair not wanting to wear something pinkish).

Months later a different person bought a gift (I was not told for who and didn’t even know she knew the other woman) and she was sent the exact same silk in a different size – they actually had even been dyed together and it had been waiting for the recipient the Father highlighted. Well needless to say she received it this time and wore it… it was very much a “God thing” as well

In other words, in the moments I’d “missed it” and sent the same silk – it had been HIS plan all along.  I began to understand He was wanting me to get out of His way and not burden myself with administration trying to keep track, but instead simply release yet another area to Him… one I didn’t even realize I hadn’t released.

All that to say, if you happen to get the same style twice, I pray Father shows you WHY and I hope you will share your story so others can be encouraged as well 🙂