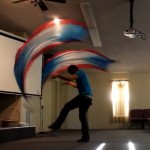 You all may remember seeing AJ before with his swing flags (1st video, 2nd video), which also make a brief appearance in this video… but mostly this video is His pair of 35×84 voi called Prophetic Glory. He also takes the silk off and uses it as a wing as well as dancing with it – all beautiful!

He also shares a bit about the video (which he apologizes for being long, but I for one was NOT disappointed by that! LOL) as well as an awesome testimony of the breakthrough in worship with the youth at his church where he is a leader:

The video is pretty long, but that is because I just recorded some worship time at the church and edited it later. I kind of want to give you some background on what’s happening in the video though.

About a week ago I was worshiping using my voi. I was proclaiming over the youth of our church when God gave me an idea. He told me to attach the 2 voi together. I did this simply by attaching the c-ring on the handle of one voi to the weight on the other voi, in essence making a double voi. They’re much larger and of course would be pretty much impossible to use in a corporate setting, but the power I felt released was incredible. I used them about halfway through the video. 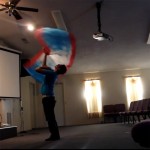 In middle of the session I was recording, I saw a spare dowel rod leaning against the wall which gave me another idea. I untied the silk from my voi and simply tied it to the end of the rod in the same way it was tied to the voi. This way I could either use it as a faux streamer, or a flag if I grabbed the material where I held the rod. Like I said, the video is pretty long and I apologize for that, but thought you might enjoy the variance.

I also wanted to give you this testimony about my flags. This past march I stepped into the role of youth leader. I’m not an ordained pastor yet, so I’m not technically the youth pastor and still report to the youth pastor whom I replaced (my spiritual father who is now the senior pastor of our church).

I’ve always been huge on worship. I was the youth worship leader and our group always praised the Father passionately. But in the past year, our group has almost completely changed mostly because of graduating seniors or kids moving, with only a few teens still attending that attended when Caleb was still leading. 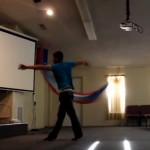 For months it seemed like the kids simply weren’t entering into worship. I had absolutely no clue how to get them to engage, which was never an issue with the group of previous years. Then I ordered my swing flags. The teens that attended both youth and Sunday church (which most did not) fell in love with them instantly.

Shortly after we went on a youth camp-out and I decided to bring my flags with. During one of the worship sets, a young girl asked if I could show her how to wave them. I showed her and away she went flagging. Before I knew it, I was being mobbed with requests of ‘Can I try next!’ My voi came in the mail the very next day.

That Wednesday at youth, I brought them along with my swing flags. And I didn’t get to use them hardly at all! All of a sudden the kids were waving their hearts out and worshiping with all their might. In one week our worship was transformed. 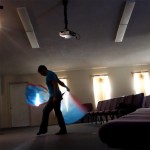 The funny thing is that our church had flags before and only two of the kids ever used them. Now I’m lucky if I get to wave them on Wednesdays at all! The best part is that because we only have so many, some kids have to wait for the next song. But in the mean time, they are staying completely engaged in worship! The kids are having incredible encounters, to the point of feeling the Lord physically manifest right next to them or holding them.

Praise God for breakthrough! and again thank you for your heart and continuing on in your amazing ministry!

20 thoughts on “Breakthrough in Worship among Youth”