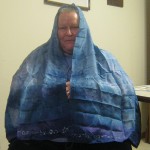 This was a gift purchased by a ministry leader for one of the ministries intercessors… the first intercessor.  She got a 22×72 tassel tallit complete with Hebrew lettering as well as a copy of a yet-unreleased piece of Dyed4you Art called Frontline Warriors (which you’ve heard mentioned before and can see below).

In addition to the word that went with the silk (and the art), one of D4Y’s prophetic team members also “heard” a song that was for them as well, which I passed along.  I’ll let the ministry leader share the story 🙂

This is a long story… but I wanted to share with you how this scarf came to be from my side of the story and how it means so much to me even though it isn’t mine.

It all started Memorial Day weekend which was also Shavuot or the Feast of Weeks. I went to the MDCI 10th Anniversary dance conference. This was the first time I was introduced to flags. At first I resisted but on Saturday night I asked a friend if I could try her flags. I fell in love. Later she told me about Dyed4you.

When I got home I again fell in love, this time with Dyed4you. I wanted one and I wanted one bad. But I watched the video that said do as the Father says so I knew I would have to wait. I prayed. I looked at the pictures every few days or so for hours at a time.

One day I was bummed because I wanted a silk and decided to take a nap while my kids were down and opened the bible at random to Matthew 26. I was going to flip until I saw the headline “Anointing at Bethany” so I read it. Then I received a text message from a dear friend. It was a picture of a woman kneeling a Yeshua’s (Jesus’s) feet. There was a jar next to His chair and she had long dark brown hair (like me) and was wearing a red dress that looked like a Dyed4you silk! (I had tried to enter a giveaway for Cora to win the Intercessor birthing silk because she is a very powerful prayer warrior.)

Receiving that image would not have meant as much coming from anyone else. She said she received it and God told her someone else needed to see it, so she sent it to several of her friends. I needed it, I felt like God was telling me I would get a scarf, so I was able to wait patiently.

Fast forward a few months and God is taking my husband and me into a whole new level of ministry. A recent acquaintance said we needed to get intercessors. We knew immediately who our first intercessor would be. The intercessor friend. We asked her and she said yes. I told my husband I wanted to get a silk for each of our intercessors and he thought it was a good idea, but not quite time yet.

We received a monetary gift and we knew immediately what to do with it. The intercessor’s silk. We ordered a ladies tallit with a hebrew scripture on it. God told us the scripture but the rest was up to Dyed4you. 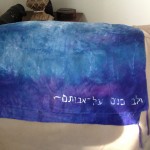 What happened next was a series of events over a week that were confirmation after confirmation.

Saturday evening while together after havdalah (ending of the Sabbath), I was ministering to a young woman of 16. I decided we needed to talk to our intercessor because of some things happening in my young friends life that she would understand, I didn’t because I haven’t experienced them. At one point she mentioned the prodigal son, the father gave him a robe and a ring, the robe was for protection and the ring was for the father’s authority.

The next morning after our personal soaking time, my husband mentioned a vision he had of Yeshua giving him a ring with purple and blue jewels. He asked what it was for but Yeshua had to leave before he could answer. My husband didn’t know what it meant, I said “I Do!” It’s the signet ring of authority. I knew because she mentioned it the night before. I felt like God told me the answer the night before because He would be able to tell my husband, the next day. It was a confirmation.

After that I kept looking on facebook to see if Meghan had posted a picture of her silk. And finally I saw it. I knew it was ours because of the hebrew lettering God told us to put on it. It was beautiful. It was perfect.

I showed my husband and he said “is that ours, it has to be because the words are the verse God picked and the colors match the purple and blue jewels in the ring Yeshua gave me.” Another confirmation!

The silk was mailed on a Monday, we received it on a Wednesday and on Saturday we wrote the note for the card that came with it, Front line Warriors. Saturday evening after Havdalah she came over and we gave her the silk. She wasn’t too surprised because apparently I gave away too many hints, but she was none the less excited to receive it.

She choked back tears as she read the card and as my husband read the 3-page letter to her. I told her about the song that Meghan emailed to us but didn’t write in the letter. My husband and I had never heard of it before but she had! We played the song “Bind us Together” (I found it on YouTube) and we all prayed together.

After we prayed she even let me and my husband try it on. Before she left she was telling us about the scarves she uses at home to pray. Nothing special just scarves or even a wrap around swimsuit cover that is big enough to fit over her.

But she said she felt like God asked her if she wanted a ladies tallit. She told God “It would be nice but I’m not complaining, I do okay with what I’ve got.” We had ordered her a Ladies Tallit.

We gave it to her the day before Yom Teruah (Feast of Trumpets) which is the civil New Year for the Jews. She wore her tallit to the Yom Teruah service Sunday evening. L’Shana Tova, a common greeting around this time, means “to a Good Year”. I think this is going to the be the beginning of more good things to come.

Thank you Meghan and Dyed4you. I love seeing God work through you and I’m looking forward to our next silk.