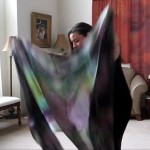 I am finally posting a blog after over a MONTH of not posting one! That was a new record for me and I apologize.  So I’m rejoining the blogging world with some silk ministry – this is a 35×84 called For His Glory.

Now as Jesus passed by, He saw a man who was blind from birth. And His disciples asked Him, saying, “Rabbi, who sinned, this man or his parents, that he was born blind?”

Jesus answered, “Neither this man nor his parents sinned, but that the works of God should be revealed in him. I must work the works of Him who sent Me while it is day; the night is coming when no one can work. As long as I am in the world, I am the light of the world.”

When He had said these things, He spat on the ground and made clay with the saliva; and He anointed the eyes of the blind man with the clay. And He said to him, “Go, wash in the pool of Siloam” (which is translated, Sent). So he went and washed, and came back seeing.

Therefore the neighbors and those who previously had seen that he was blind said, “Is not this he who sat and begged?” 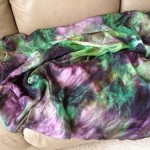 Therefore they said to him, “How were your eyes opened?”

He answered and said, “A Man called Jesus made clay and anointed my eyes and said to me, ‘Go to the pool of Siloam and wash.’ So I went and washed, and I received sight.”

The music is from Julie True’s album Sounds of Healing and is called Listening for Your Voice.  Again, agreeing in prayer for those who are waiting for their breakthrough in healing!

25 thoughts on “For His Glory”