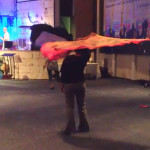 In these videos, you’ll see me using my LW (large wing) quill called Under His Wings (which is one of our popular styles) and my very favorite flag! We’ve seen this style before – Meghan has it in a dowel wing, we’ve seen it as an 8mm semicircle voi,  and it even appeared as one of the demo silks in our Basic Moves for Dancing with Scarves. The videos below were taken during a live service at Passion for Truth (PFT). You will also see some Dyed4you swing flags in the background as well a Prophetic Worship Banner quill and streamers from both ministries 🙂

8 thoughts on “Under His Wings LW Quill”