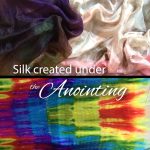 Several years back I did a post called Why it Matters Who Makes Your Flags. The short version is basically that I want to use tools made by those God has anointed to create them, not ones created in the flesh. I shared in that post several other ministries that I felt were anointed to create worship tools including of course our sister ministry Prophetic Worship Banners, Andrea York, and Margie Puckett of Unhindered and Unashamed. I wanted to share a couple more since I’ve acquired some new flags. Some are from the ministries I’ve already mentioned, but a couple new ones too. Hope you enjoy!

One of my favorite sets of quills are these beauties from Prophetic Worship Banners called Oceans of Love.

I got these anointed silks from my friend Tasha at Standard of the Lord (I met her through Nickol at Prophetic Worship Banners). Tasha’s on a dyeing sabbatical at the moment, but I wanted to share these anyway. The first is called Alabaster and the second is Jars of Clay.

This vivid beauty comes from Rebecca at Dyeing at the Altar. It’s called Open Door to Heaven.

This is a pair of Lion of Judah quills from Unhindered and Unashamed. Such a gifted artist!

All that to say, prayerfully seek the Father to know where and from whom He would have you get your worship tools from. It matters. When I’ve purchased some of mine (because yes I consider it an honor to get to support fellow silk ministries when He leads!), I think of all of you in the Dyed4you community and expressive worship community at large and I pray that the right tools would be in the right hands. Amen!

2 thoughts on “Created Under the Anointing”