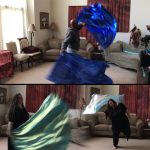 This is my third post now about  Why it Matters Who Makes Your Flags and why it’s so important to have tools Created Under the Anointing. I want to start by quoting a section of my initial post.

When the tabernacle was built the Lord says of the men he selected to lead the design/creation that He had “filled him with the Spirit of God, with wisdom, with understanding, with knowledge and with all kinds of skills— to make artistic designs” (Ex 31:3-4).

You see anybody can construct a flag, but not just anyone is ANOINTED to do it. And when we work outside of what we’re called and anointed to do all those works get burned up – they are of the flesh. So I will not use a “flesh created” flag. I only want what is created under the unction of His spirit.

I feel like this is a concept that seems to get lost in our “I can be anything I want to be” culture. Instead of focusing on what God created us to be and cultivating those gifts, and allowing Him to shine through as we operate in that sweet spot of what He created us to be, too often people see other’s operating in their giftings and instead of sowing into their lives and honoring what God has created them to do, they try to copy or counterfeit that anointing. Which is sad because they rob the Body the blessing of having them be who THEY were created to be (because each of us has an integral role to play), but they also miss the blessing of coming into agreement with what GOD is doing (I also touch on this topic post on dyeing).

Can you imagine an apple tree getting upset it’s not a lemon tree and trying to copy what the lemon tree is? It wouldn’t do a very good job! And in case you’re wondering, this topic I’m talking about is straight out of scripture. 1 Corinthians 12:14-25 (VOICE):

Here’s what I mean: the body is not made of one large part but of many different parts. Would it seem right for the foot to cry, “I am not a hand, so I couldn’t be part of this body”? Even if it did, it wouldn’t be any less joined to the body. And what about an ear? If an ear started to whine, “I am not an eye; I shouldn’t be attached to this body,” in all its pouting, it is still part of the body. Imagine the entire body as an eye. How would a giant eye be able to hear? And if the entire body were an ear, how would an ear be able to smell? This is where God comes in. God has meticulously put this body together; He placed each part in the exact place to perform the exact function He wanted. If all members were a single part, where would the body be? So now, many members function within the one body. The eye cannot wail at the hand, “I have no need for you,” nor could the head bellow at the feet, “I won’t go one more step with you.” It’s actually the opposite. The members who seem to have the weaker functions are necessary to keep the body moving; the body parts that seem less important we treat as some of the most valuable; and those unfit, untamed, unpresentable members we treat with an even greater modesty. That’s something the more presentable members don’t need. But God designed the body in such a way that greater significance is given to the seemingly insignificant part. That way there should be no division in the body; instead, all the parts mutually depend on and care for one another.

All that to say, when I flag, I want to use tools created under the anointing (I’m the same way about prophetic art)! And I want to encourage you to do that too. And that’s not a way of selling your our flags (though they’re definitely an option), but in these posts I’ve shared other ministries that I believe have been called to create worship tools and are operating under the anointing as they create. How do I know? I feel it! In the same way you can hear two different people sing and with one it just moves you in inexplicable ways, that person is likely operating in the anointing of their gifting.

So in my previous posts I’ve shared videos of my flags from other anointed ministries like Prophetic Worship Banners, Unhindered and Unashamed, Standard of the Lord, Dyeing at the Altar, and Andrea York; and today I want to share Called to Flag. 🙂

My hubby appropriated the royal blue liquid metal flags. 🙂  Then you’ll see me using one of my aqua/gold liquid fire ones (and a short slo-mo of hubby with one too) and one of my triple layer Living Water flags (which I cried when I opened because I could sense the anointing on). Hope you enjoy seeing these 🙂

5 thoughts on “Anointed vs Counterfeit”