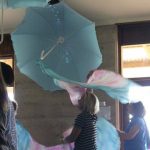 Not a short scarf story, but an awesome one! Always cools to hear what God does through the silks He births at Dyed4you. These were used at a retreat and Father brought healing! How awesome is He?

I just want to give you a testimony that happened over the weekend during a Ladies retreat that I was at. On Friday I got there and everything was blue. All the decorations was blue and it just blew my mind. I always dance in the back not to offend some people that is not ready to be blessed by the flags. I first used my “Crown of Glory” wings and so many people came to me and said they are so beautiful. But then I realized that my other flags “Alabaster box” were more fitting because of the colours. The speaker noticed it and was so blessed by the way I danced with the flags. On Saturday I was approached by a young lady asking to use my wings for a presentation or skid for the evening.

If you know me well enough you would know that I never allow to let just anyone dance with my flags, because I feel they are special and that they are “love letters” from God and me using them is my way of giving back to HIM. But before I could say no, the words YES no worries flow from my lips and I walked over to them and took them out of the bag and handed it to the lady without saying anything. Then my friend, Beryl, came up to me and said that she saw my wings in someone elses hands and I started to cry and said I just said yes. She understood the situation. She asked me why I said yes if I’m uncomfortable and I said, because I had to. The Holy Spirit prompted me. She in return said, don’t worry they will come back with a double blessing.

Then it was time for every group to present there presentation. The first group up was the group that had my flag wings. (As a side note since the first day of the camp I saw this beautiful lady coming in and I felt like gentleness and kindness was walking with her on each side of her and I felt a strong healing anointing on her. I did not know this lady and all the ladies of the camp came from different place). Back to the night of the presentation. When I saw it was this beautiful lady using them I felt very pleased that I did responded positively.

After the evening was finished she walked by me and I asked her to sit for a moment. I got her name, Leanne. I told her the whole story of how I never allow just anyone to use my flags but that I felt the unction of the Holy Spirit to let them go. I told her that I felt like Abraham putting my promise on the altar, but that God just gave it back to me with a double blessing on it. I told her that I felt she had a healing mantle and that Gentleness and Kindness walked next to her.

She in return shared with me that on the Friday she was in a shop where a man walked up to her and her friend and he told her the same thing. So I told her that I was really blessed that she used them. That was a God ordained moment. She got up and she went over to my flags (wings) and she gave them back to me in a way you would present someone a sword. She prayed over them and asked God to double bless the flags and to let the mantle of healing be on the flags. The whole weekend was about rewriting your story.

On Sunday I took my place in the back and the speaker invited me to come and dance in the front so that everyone can receive the blessing not just those who were close by to see. I accepted and proceeded to the front, we worshiped and it was so powerful. I could feel the presence of the Holy Spirit so strong that I had to go down on my knees. After worship we used communion.

(Rewind a little bit, early the morning we were having our morning coffee and one of the ladies were talking to another and the one lady asked the other what is your pain level now if your pain level was a 10 the previous night. She responded that it was about a 4 and that she could sit, but sit still and had to stand up very carefully.)

Back to the communion. I got the unction to place my flags around her shoulders. At first I felt like it was the wrong timing and kept my seat. The I felt it again so I got up and I walked over to my flags and I wrapped them around her, Tracey’s, shoulders. I was at her back and I just slide my hands down her arms while saying “receive your healing”. That was all I was prompted to do so I stepped back. She turned to me and smiled and mouthed a thank you.

After communion she walked over to me and she said thank you, but her eyes were so alive. She began to tell me that in that moment the flags were around her shoulders she felt something happen. The pain in her back disappeared. She got up and she demonstrated to me by doing the following…The first reached for the sky, then touched the ground saying I could not do this for a long time and in the same breathe she did a back bent where she bent backwards and came back up. I was blown away.

My words is not enough to explain the feeling of what happened. I just realized that God had used those wings to heal a bad back just like he used Paul’s handkerchief to heal. She then went to the front to tell the speaker and she did it again. The speaker then got prompted to do prayer healing and Leanne was send to the back and I was standing by with my flags. People lined up and I hanged the flags around their shoulders and Leanne prayed…. People came back to us telling us that they received healing.

One of them was a lady that was in agony the whole weekend because she could not move her neck and all of a sudden God touched her and she could. Another lady came back and she told me that she had fibromyalgia and was healed in the past but the symptoms came back and that it had been so bad the Sunday morning that she found it very difficult to even stand. She had nerve pain that went through her face into her chest and she said that she stepped away after prayer and the first step was still pain and she said then she took her healing and the pain disappeared. Hours later she came to me to testify to what had happened.

My flags were recommissioned. They have taken a backseat to my Crown of Glory flags. But now they will be used again more often than not. I hope that this will bless you as much as it blessed me. Love Amanda (Western Australia)

7 thoughts on “Healing with Flags at a Retreat”