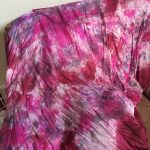 This is a fun silk story about a pair of large bendie wings (5mm aka “light” weight silk) called Trustworthy that I had set aside to giveaway. I had a whole giveaway planned and had even done the video announcement for it. Then one night as I’m scrolling through Facebook, several videos showed up in my feed of a woman worshiping. I didn’t know her, she’d shared them in a group we’re both part of, but I clearly heard God say “Give them to her.”

Surprised, but fine with His direction (not that it matters whether I’m fine with it or not, I just mean it was easy to follow through because I’d already planned to give them away anyhow), I contacted her for a shipping address. She was so blessed! And it turned out the next day was a her birthday 🙂 Gotta love those kisses from heaven!

Here was her response when she received the wings and below are a couple videos I shot before sending them. 🙂

Daddy God is so good! His timing is so precious and beautiful! I was contacted by Dyed4you after I shared some videos of my flag dancing. She said the Lord pressed upon her heart to gift me a pair of wing flags! My heart leapt for joy! My birthday was yesterday and these flags are literally the perfect gift! Not only are they gorgeous but they’re exactly the color the Lord revealed to me in my vision of emerging from the cocoon and spreading my wings as a butterfly! I lost my breath when I felt the anointing of these flags. Thank you so very much for this blessing! I will use them often!! I promise to post a video soon!