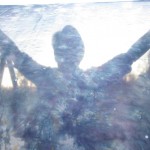 During Amanda E’s visit this past October, I felt the Lord prompt me that He wanted me (Meghan) to get a word.  So I slipped one into the pre-dye planning with no instructions and left it for Amanda to birth.

We worked through the dyeing list and listened as the Lord instructed what should be done with each scarf.  There were several I had set aside for her to do (including a pair of wing/vois for herself that her mom and dad had purchased as a gift, but that’s another scarf story in and of itself!). Finally we got to the one I knew was for me and I told her I couldn’t participate in birthing this one because I was too close and wanted to be certain I didn’t function with bias (later when she found out who it was for she couldn’t help but laugh at how I’d worded this). 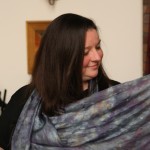 She paused and prayed and then began to speak just the random thoughts – not the final scarf letter yet.  The first words out of her mouth were “I feel like this person has lost a job” (Yep!), she continued, “and that they’ve lost people – like relationships close to them” (BIG yep!) – she continued on reading my mail, which ultimately was an exhortation from the Lord. 🙂

It’s as though you have just come through a storm and there are clouds that are rolling away. Watching the storm pass and looking around everything you had built up appears to be gone…friends and relationships, financial stability, things of this world that aren’t “bad” but were a source of comfort in the natural. However, you are left in this storm standing on a firm foundation whose roots and strength run deep. There’s a deep peace and confidence about what has happened because ultimately you know that what is left, the foundation, is all that truly matters. Though it appears there has been great loss, a deep peace fills you with an assurance that the severe pruning and pain of it is not in vain but necessary to turn your entire focus onto the Lord because He is jealous for you – your attention, love, and time.

It’s truly a time that brings you to a crossroads. Will you choose to truly focus on Jesus and fully pursue with all your heart the promises He’s given you? All He wants is to bring you to a higher, greater level so you may walk fully in your destiny and all He has for you. This is a time to choose to focus on Him wholly and wait on the fullness if His promises. 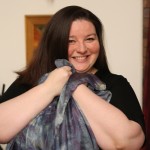 I fought tears as I received the gentle chastening of the Lord smoothed down by such an accurate picture of the season He’d had me in.  Finally I told her it was for me!   I love how God moves through the body to minister to each other, and I love how God moved through my own ministry using someone else to minister so deeply to me.  He is so good!

I could sense His presence so strongly and felt such an intimate touch from Him it rocked me to the core.  It also helped me understand more fully how OTHERS feel when they receive their scarves and are ministered to in kind. 🙂 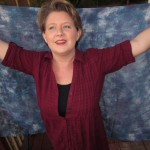 Mine wasn’t the only “Wait Upon the Lord” scarf that was created.  God moves in themes and seasons and this was a timely word for more than just me!  I heard testimonies of a couple of them, one shared pictures and wrote out how her Wait Upon the Lord ministered to her:

The scarf is awesome. I have read the letter to my daughter and my friend and they both laughed while I cried. It is right on.

I have been in a very long season of waiting on God to fulfill a very big promise that affects every part of my life and because the season has been long and others weren’t comfortable with my promise or my waiting, truly a lot has been lost. He is amazing though in that I have grown more than I ever imagined possible and I know Him in ways that I could not have dreamed! 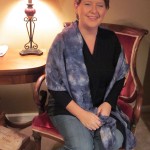 When I opened the package this morning and read the letter I was amazed but at first almost disappointed. I thought “Lord, seriously, more waiting?” He ever so gently reminded me that the storm is passing and then showed me a funny picture… I was never a girl scout but He showed me that the scarf was like a merit badge that you receive after completing a specific task.

While I will never stop waiting on Him it is clear that this season is almost over and the clouds truly are moving out! He told me 14 years ago to plant my feet on the Rock and it seemed as if He poured concrete around them; I had no idea what the storm would be like but boy has it been a storm! It hasn’t always looked like it to others but I was the one who felt the wind blow! The foundation has held firm and grown even stronger and really is the only thing that matters! 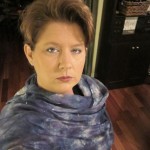 I have seen an unusual amount of rainbows this year, which the Lord has always used for me to see His promises, but one day He showed me a very powerful lesson in one. Part of that lesson is that you don’t get the rainbow without the rain/storm. ( the other part was that I could not make the rainbow show up when I wanted it to. I could only wait for him to line everything up) There you go – wait on the Lord!

Several of the things in the letter were also said to me at a retreat I went on 2 weeks ago. I have known the Lord since I was 7 and am 40 now. It never ceases to amaze me how He speaks so consistently to those who will hear!

Thank you so much for being a hearer and a doer! I pray He showers you with many blessings and increases your gift beyond what you could ever have imagined! I hope all of this make sense. God Bless you 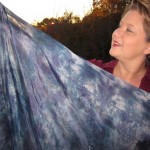 As she and I began to talk about our mutual scarf, we discovered SO many similarities in where we were and even in our struggles (like getting so focused on ministry to people that time with God would too often get neglected – thus the chastening!)

We ended up getting to have a phone call where we encouraged and ministered to one another.  Again, God is just so beautiful in how He works and connects people and corrects us in love. 🙂