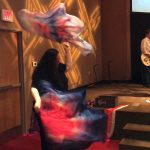 I’m still more than a little bit in shock because this morning (technically yesterday since it’s after midnight) my pastor’s message was so tied to the silks I had it could not have been clearer there is one Spirit. I’ll back up first and say that right now I’m very into unmatched pairs. In part simply because God recently began birthing multi-silk letters where the combination of two (or more) silks births an additional word. 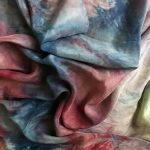 A month or so ago, I birthed a new silk called Focused on the Kingdom. A pair of wings went to a customer and a single wing went to me (and ended up in a recent Prophetic “Portrait” called “Persistent Fruit” that has since been released into our gallery). 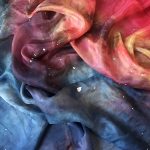 Since I started birthing multi-silk letters, I’ve been wanting to make another wing to create a pair for it, but every time I’d try to make something new I’d get a check so I waited. Finally yesterday it suddenly occurred to me maybe He wanted me to remake an existing silk. Sure enough after prayer He told me to make Sword of the Spirit, which ended up being an awesome match for it! Sword of the Spirit is of course based on Ephesians 6 and the armor of God.

So I began praying about the multi-silk name, and I heard “Eyes Wide Open” and immediately thought of the story in 2 Kings 6 where Elisha asks for his servant’s eyes to be opened so he can see the vast heavenly hosts surrounding their enemies (who were surrounding them). I understood He was emphasizing being sensitive in the spiritual realm. Having our spiritual eyes wide open so we can truly understand what is happening.

I was partway through birthing the multi-silk word when no more would come. I knew there was more – lyrics, a word, something – but I couldn’t find it and simply felt like I should set it aside and come back to it after church the next day (today).

I worshipped with my flags during worship as did my hubby. I used them extensively as well as my new My Carrier of Peace wings (which are a whole separate silk story: Peace Breakthrough). Below are some clips grabbed during worship.

After worship, pastor John began preaching. He started with saying how we need to have our eyes wide open and took us to 2 Kings 6, sharing the story of Elisha and his servant. He then went on to talk about the armor of God and Ephesians 6. He paid particular focus on imparting peace. And talked about staying focused on the kingdom.

To say I was floored would be an understatement! Essentially God had given me my pastor’s whole message in silk!! Talk about confirmation.

Then I asked God why He did it and sensed His point (aside from the clear encouragement that we hear Him and are operating in one Spirit) was for emphasis. In biblical times, they couldn’t bold or italicize, so for emphasis things would be repeated (e.g. Holy holy holy). So here God is emphasizing the importance of this message.

These things are VITAL in these times and in this season. Hopefully this testimony blesses you. The full silk word is available to read on our Dyed4you Ministries blog: Eyes Wide Open. The slo-mo video of this mismatched pair is below 🙂

After posting this, I did a Facebook live sharing the story – which includes both My Carrier of Peace (read the silk word/read the testimony) and Eyes Wide Open which is a multi-silk word comprised of Focused on the Kingdom and Sword of the Spirit (read the silk word/read the testimony on this page). I get a little rambly, but it’s fun hearing the story in addition to reading the details 🙂 I hope you’re blessed by it!

3 thoughts on “Eyes Wide Open: A Message in Silk”