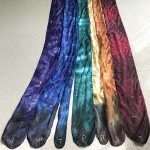 Periodically, we get requests for special orders, and assuming Papa gives the ok for us to create whatever is requested, we will happily collaborate with others on a new piece. I had one such request this past week, and little did I know the beautiful upheaval this awesome silk would create.

Mary, who is an active part of the Dyed4you Community, contacted me on Friday requesting a piece for a prophetic act Papa had instructed her about. Since that’s her story to tell, I will share a couple key points: the theme was the Seven Spirits of God and it needed to be 34″ wide. Little did I know God was going to hijack my time for the next two days and little did Mary know the resounding impact and confirmation that was on its way.

He impressed an urgency on me about creating the piece. He had me contact one of the other members of our Dyed4you Leadership team, and she and I co-labored throughout the day collaborating on the word Father was bringing forth. There were SO many confirmations even as the word was being birthed, and it became clear I was to make one for myself as well.

In the silk word, Father connected so many intricate details. He had us craft it as a multi-silk word with pieces for each of the seven Spirits (Spirit of the Lord, Spirit of Wisdom, Spirit of Understanding, Spirit of Counsel, Spirit of Might, Spirit of Knowledge, and Spirit of the Fear of the Lord) in addition to a portion connecting the whole theme and its various pieces. There were layers upon layers of meaning and prophetic download.

When it came time to craft it, He was very specific that each strip (representing one of the seven Spirits of God) should be a different size based on how the recipients flows in each. I cut my pieces and had Him lead which was which color (I confess I was surprised on some), and I did Mary’s at the same time though hers were different widths than mine in the various areas. Beautiful to have this visual representation of our uniqueness. 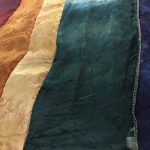 After each of the individual pieces was dyed, I sewed mine back together down the greater portion of the flag leaving just a small bit of streamer flag bits at the end. Apparently I wasn’t being careful enough because I managed to sew two together the wrong way! Let me just say that I am not an accomplished seamstress. I leave all the fancy sewing to Larisa, who has a gift for it. I do what I call functional sewing. My flags will work and hold together, but I will never win awards for my seams. Gratefully when a flag is in motion you don’t see the seams, you see the silk and that is where my anointing lies.

In any case, this error required me to re-sew it facing the other direction, which meant that I lost some width on both the green and blue strips (Spirit of Counsel and Spirit of Might). The Spirit of Counsel was a relatively wide one, so I chucked to myself that perhaps I had an inflated understanding of my ability to operate in that flow, and took that under advisement (I.e. get more humble!).

However, the Spirit of Might was the one that troubled me the most because I know there are no accidents in God. He is sovereign. He knew I would have the accident and knew it would cause me to lose about 25% of my already narrow representation of might. So I was concerned that the blue strip, which had been my smallest already was now getting diminished further. As I continued sewing, I was expressing my concern about this to God. I even said, “I don’t like that I have so little blue!”

When I started both flags, the fabric was 45″ wide. When I completed mine it was 31″, which was a MUCH bigger loss than I calculated (you lose some in sewing and also shrinkage in the dyeing process, but this was about twice what I’d expected). I began to be concerned that Mary’s wasn’t going to turn out the necessary 34″ wide. But trusting He was leading and would present a solution when and if it was needed I powered on.

The next step was to dye the tips black (this is an indication of the “burnt” factor because the Spirits also are connected to the lampstand), and the Hebrew letters were added in gold shimmer at the tip of each strip (spelling out Holy Spirit) to symbolize the flame. The fluttering movement the fingerlike pieces make in motion truly mimic that flame-like feel.

By Saturday evening mine was completed and I finished off Mary’s too, connecting her pieces, doing the overdyeing, adding her Hebrew letter “flames”, and finally attaching it to the ribbon. I knew the hand of God was seriously on this the moment I measured her piece and it was exactly 34″ wide. Given the issues and shrinkage I experienced, there’s virtually no way that could have turned out so precisely (at least not with my skill set) unless it was God’s hand at work.

Bringing the Flag to Church

Sunday morning I brought the flag to church. As I worshipped with it during rehearsals before service, I sensed Father saying He would bring confirmation. I cannot tell you how many times my pastor has preached a message that is an exact parallel to a silk word I’ve birthed that week (our post Eyes Wide Open: A Message in Silk is one example).

When service ended and nothing about the seven Spirits of God had come up, I was disappointed, but just quietly pondering. I picked up the flag again and began to worship with it (in the video below of the service you’ll see me off to the left about 1:27 minutes in), but sensed I was to have my pastor pray for me. This was during ministry time so a number of people were at the front praying for others and all of them had someone they were praying over except my pastor (which let me tell you is unusual!).

I set the flag down approached Pastor John and told him I didn’t have a specific prayer request just knew I was supposed to come up. I could feel the anointing flowing before he even said a word. When he did he began by saying he was seeing a plumb line and gave Zechariah 4:10 (AMP) “Who [with reason] despises the day of small things (beginnings)? For these seven [eyes] shall rejoice when they see the plumb line in the hand of Zerubbabel. They are the eyes of the Lord which roam throughout the earth.”

He went on to pray the Seven Spirits of God be perfectly manifested in me, and asked for an increase of each one by name and continued in such specificity to confirm details of the silk letter in progress. Then he said he was seeing an increase of blue “whatever that means” – I literally started laughing because he emphasized it several times having no idea the conversation I’d had with God about wanting more blue (Spirit of Might, the one I lost a good portion of during the creation). Later he shared he had heard “Blue Bayou” and knew it was a play on words for “Blue by you.” Our God is so fun!

Anyway, after he was done praying, I had Allen bring over the flag so I could explain to him what he’d just prayed and give him encouragement and major confirmation. But God wasn’t done blowing my socks off yet.

I sat down to simply soak in what had just happened. The impact in the spiritual realm was staggering to me. I could feel the weight of it. I wrapped myself in my flag, which is something I rarely do though I know many others do so, but I felt the need to be clothed in it (little did I know Papa had already begun crafting a piece to the word that was connected to this desire.)

Next, Larisa prayed for me (having no idea what the pastor had just prayed, nor having seen any portion of the silk word yet). As she prayed she began praying things also directly from the silk word (which again she’d never seen)! And finally near the end she kept praying for me to be “mighty” in this and “mighty” in that – I had to laugh again because God was making it so clear He’d heard my concerned heart cry over not enough Spirit of Might!

God never ceases to amaze me how He moves through these beautiful silks and their words. After this testimony unfolded I began to understand why the silk letter hadn’t been completed yet, it’s because this story is part of the letter. This anointing and the proof and confirmation of God’s instruction is so clear – His fingerprints are all over this, and that too is intended to boost faith. That too is intended to encourage and stir the hearts of any recipients. I rejoice in the confirmations and words of encouragement He brings through this ministry. What an honor to get to serve such an amazing God!

Below is a demo of the flag in slow-motion.

Below is the recording of the service. You’ll see a variety of Dyed4you silks in action as well as several Dyed4you team members and the “mom” of Dyed4you. Elisa (one of our leadership team) even shares a bit about 42 min in. You’ll see me with the Seven Spirits of God flag briefly before I go for prayer at about the 1 hour 27 minute mark.

Since Mary shared some pictures and video, we wanted to share those with you as well 🙂 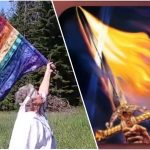 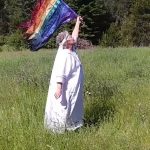 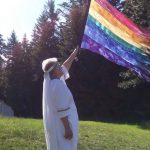 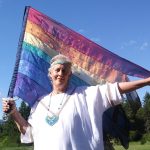 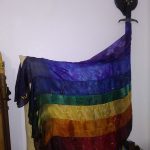 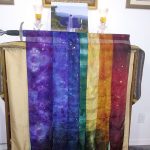 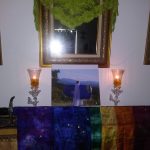 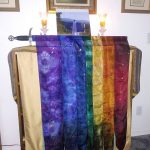