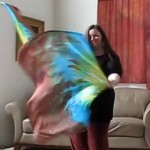 You’ve seen Dwelling in His Beauty swing flags before (and a wing), but this isn’t a demo because this is MY pair along with my scarf story 🙂

First of all, my sister was the first one to receive a Dwelling in His Beauty silk, so it held personal meaning from the start (see my sister in her’s).  The problem with my job is I fall in love with silks ALL the time and at the end of the day I can’t wear them all at once, so I am very careful to only make one when I feel the Lord leading me to.

Several months back I received a word from someone in the Dyed4you community that touched me deeply (I can’t begin to tell you how often I get comments that are prophetic, encouraging, a blessing, etc. or even straight up words like this was. Y’all end up in my journal all the time!).

This is an excerpt from my journal that overviews what was said: 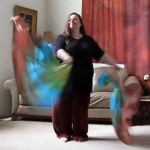 She said that I took the time to pick up what appeared to be crusty rocks. Things discarded and unwanted by others, but when the Lord would point them out and say “pick that up” I would obey even if nothing in the natural encouraged it. I’d take the time to clean and polish these rocks only to discover that they were beautiful gems whose beauty had simply been hidden.

Then I sit surrounded by loveliness and glory and others marvel at how one such as me could have such a stunning collection. But they don’t understand they are the same ones who would have allowed their natural eyes to just the “crusty rocks” and pass them by not understanding their true worth or being willing to stop and collect them at the Lord’s bidding. 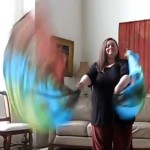 These gems are the ladies Yah’s put around me. Precious women who have been overlooked or rejected but whose hearts are golden and who flourish as I yield to be His vessel to love and help bring healing to them (or whatever He asks).

The fact is I am blessed to be surrounded by amazingly anointed ladies and it’s humbling because more often than not I see them operating in giftings greater than my own… they simply needed someone to encourage them, and I am gifted to be an encourager 🙂

Now fast forward to when I posted the link to the last pair of Dwelling in His Beauty swing flags on Facebook and one of you in the Dyed4you Community (Melissa M) posted this comment: 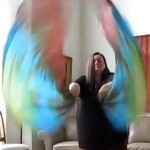 Wow, the thing that came to mind while watching this video is what the Lord told me a long time ago.

“Though you stumble and seem drenched in mud, I tell you the truth every gem is cleaned from the filth and prized! The filth will never define the outcome of the gem! I love you. I truly deeply wholeheartedly love you. ” ~ Papa God

When you unearth a gem you wash it and reveal the beauty within as it reflects the light, and while looking at these colors I am reminded of that very fact. The brown (dirt), the blue (water), the green (gem) and yellow (light). Awesome job Meghan! 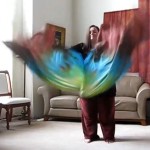 So many in the Body of Christ feel neglected, overlooked, marginalized, etc. or have been put down by others who are intimidated by their giftings. We are called to minister to and lover one another. We are ONE body!

With all that said, below is a video of me worshiping with my pair of Dwelling in His Beauty. It is long and unedited and includes outtakes – I smack my head twice and get them tangled more than once – but it embodies (to me) the beauty that is in our worship even when it isn’t perfect by the world’s standards… it is still pleasing to the audience of One for Whom it was intended 🙂

Oh and like the Wait Upon the Lord wing video, the music is my friend Ariel Henry live from the Destiny Church Prayer Room.  She has an album coming out soon (hopefully) – I’ll let you know when it does because you’ll definitely want to get it!